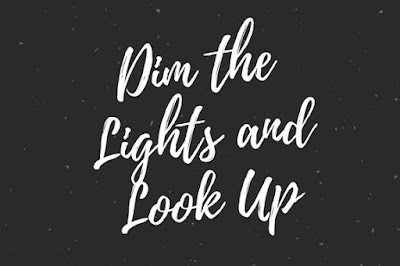 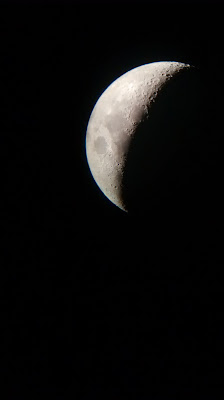 Me, my sister, and my cousins visiting from our hometown decided to go outside where it was cooler – and we could actually enjoy nature without singeing our eyebrows off or feeling groggy with the heat – to watch the stars. Nobody expected to see anything that night but little white dots surrounding our field of vision; so when we took the telescope out of its box and carefully set it up, taking turns one by one looking through the lenses, you can bet we marveled at the way you could see each and every tiny crater (probably dozens of miles across, really).

It was pretty incredible to experience the moon like that.

Makes you feel like the moon, and everything out there, is close enough to touch with your fingertips. Makes you understand why a human being would want to go up there and experience it all first-hand; closer by.

A shoutout to the astronauts constantly risking their lives in order to continue the adventures in space. Besides the fact that no human has been on the moon in the last 41 years, they still do some hard work up in satellites and the ISS.


“I think we’re going to the moon because it’s in the nature of the human being to face challenges. It’s by the nature of his deep inner soul… we’re required to do these things just as salmon swim upstream.”
Neil Armstrong

Later on while searching up the moon phases and stuff I found out we were looking at it while it was in its waning crescent stage. This stage in particular reminds me of the moon almost – almost – falling asleep.

The moon, in general, is a fascinating thing. It hangs there in space, a floating orb of rock and dust, illuminating the earth each time the sun hits the visible part of its surface.
If that doesn’t sound cool then I don’t know where your head is at.

Clearly, the moon would have been at the center-point of ancient reverence (alongside earth) because of how powerful it can be viewed as. I mean, it has never left earth since the beginning of its time.
Ever since God called it into existence on day four (Genesis 1:14-19), it has been “the ruler of night”.

In mythology, the moon takes many forms:

🌙 as a creator goddess

🌙 for pagans, workings should be planned according to the different phases and precisely timed

🌙 cause for human insanity


The moon is a great influence to poets, artists, singers, and ancient proverbs as well.

If the full moon loves you, why worry about the stars?       (Tunisian Proverb)
Even Frank Sinatra had a song featuring the moment when the celestial and love collide:
(Renee Dominique is an amazing singer, you should check her channel out here)