The Librarian of Auschwitz by Antonio Iturbe
Translated by Lilit Thwaites
Published October 10th, 2017 by Henry Holt and Co.

Based on the experience of real-life Auschwitz prisoner Dita Kraus, this is the incredible story of a girl who risked her life to keep the magic of books alive during the Holocaust.
Fourteen-year-old Dita is one of the many imprisoned by the Nazis at Auschwitz. Taken, along with her mother and father, from the Terezín ghetto in Prague, Dita is adjusting to the constant terror that is life in the camp. When Jewish leader Freddy Hirsch asks Dita to take charge of the eight precious volumes the prisoners have managed to sneak past the guards, she agrees. And so Dita becomes the librarian of Auschwitz.
Out of one of the darkest chapters of human history comes this extraordinary story of courage and hope. 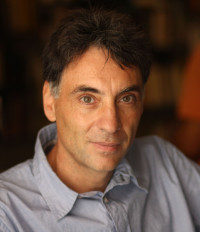 Antonio Iturbe is a Spanish journalist, writer, and professor. He grew up in Barcelona, Spain where one day would graduate from the Universidad Autonoma de Barcelona with a Bachelor’s degree in Journalism. Now he has won a numerous amount of praise for his novels , given many lectures on journalism, become a postgraduate professor at the Master of Cultural Journalism at the Universidad Autonoma de Madrid, and in 2017 was even awarded the Premio Biblioteca Breve with his latest novel: A cielo abierto.

Dr. Lilit M. Zekulin Thwaites has been studying Spanish for many years. She started to learn the language during her time at McGill University in Canada, and completed her PhD at the University of Toronto. She later moved to Australia where, for more than thirty years, has been teaching and translating everything from essays to children’s books into English. Her ongoing research projects and events have allowed her to focus on promoting Spanish and allowed the continuation of spreading the language she loves and the tedious (yet rewarding) work behind translating.

Very rarely will a book shake you into living, show you how your choices – no matter how minuscule – do affect life in the long run. Antonio Iturbe, with the flawless translation from Spanish done by Lilit Thwaites, has managed to interweave numerous real people (including even Anne and Margot Frank!) into his book and create a masterpiece in storytelling.

The Librarian of Auschwitz is a book about suffering, cruelty, foul human nature, and no doubt death, yes, but it is also one of everlasting hope, sticking together, and conjuring up happy memories to ease the pain of the present. This alone encapsulates the emotional aspect a story based off of this historical era should already have. Because war is never fun or to be dealt with lightly. The insane amount of research that clearly went into the writing of this book is evident, and I applaud Iturbe for showing us – not merely telling us – another perspective into this era.

The story follows real-life fourteen year old Dita Adlerova as she recounts being stripped from her peaceful home and forced to leave her childhood far behind as merely memories. Life in Auschwitz-Birkenau is made bearable thanks to the trust shown by the lively youth leader in the family camp, Fredy Hirsch, and the eight dusty books smuggled into their hands and kept in his office. Dita shows so much commitment to the bundles of paper that Hirsch decides to ask her to become librarian of their family camp and thus begins her daily evasions from becoming the next experiment of the dangerous Dr. Mengel and the connections she is trying to solve after the Auschwitz Resistance causes a tragedy.

Dita’s curiosity and shy bravery is a peculiar one amongst the dejected ones of her fellow prisoners. The way she turns to books is extremely dangerous but helps her cope so well with what is going on around her that she even risks her life to read. Iturbe alternates between points of view (a little confusing at first) all from very different backgrounds, and makes them connect somehow. I found myself laughing alongside Dita and her best friend Margit, boiling in anger at the injustices committed every single day at camp, and crying at friendly lives lost.

Somethings I couldn’t quite get around were the numerous rhetoricals thrown throughout the book and how the story seemed to lag at uneventful moments. I was left with unanswered questions in the end. Why did this person really die? Where did she end up? How did Dita cope so well, so quickly, all on her own? All in all, this is the only constructive criticism I have to give.

Light is being shed on one of the ugliest aspects of the war. It is both informative and mind-boggling with writing to match. I would recommend this book to children and adults alike. Although at times too harsh, it shows the reality of millions of people. Not too graphic and not too depressing. This is a must-read for young history enthusiasts and one I thoroughly enjoyed myself.

Scale – 1 = none, 2 = once or twice, 3 = neutral amount, 4 = at least once a chapter, 5 = an excessive amount
Graphic Scenes/Violence:
1   2   3   4   5
Age Range Recommendation:
It’s okay for older children (so like older than 10). Younger ones may not be able understand the cruelty and harsh environment each character is subjected to in the concentration camp, much less the traumatic decisions they are forced to make.
Crude or Profane language:
no straight out foul language, some suggestions
Drug or Alcohol Content:
none
Suggestive Scenes:

Appropriate for Christians to read?
Yes

https://www.publishersweekly.com/pw/by-topic/childrens/childrens-authors/article/75060-q-a-with-antonio-iturbe.html
** I DO NOT OWN NOR AM AFFILIATED WITH ANY EXTERNAL SITES LISTED HERE **
Biography References:
https://en.wikipedia.org/wiki/Antonio_Iturbe
http://www.latrobe.edu.au/humanities/about/staff/profile?uname=lmthwaites
No comments yet